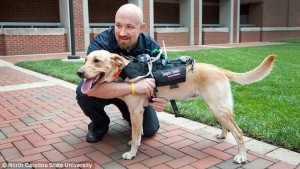 A dog harness has been developed in America that can monitor dog health, helping to improve communication between dogs and humans. This amazing piece of kit contains vibrating motors so that owners can communicate with their dog when it is out of sight. The revolutionary harness also contains sensors that have the ability to monitor a dog’s posture and its vital signs, and can pass this information to the owner. Developers hope that the device will help with training, and improve the cooperation between dogs and their handlers.

Information about the dog’s well being is gathered using sensors which detect body temperature and heart-rate, which can be used to alert people if a dog is excited or stressed. But it goes much, much further than that. In addition to the harness, software has been developed that can collect, interpret and communicate the data, and translate human requests into signals on the harness.

Researchers think that the system could also be useful for working animals such as guide dogs and search and rescue. Sean Mealin, an NC State Ph.D. student and co-author of the paper said “We’re reliant on the physiological and behavioural sensors to give us a picture of the dog’s mental and emotional state. This can help handlers identify and mitigate stress for the dogs, improving the length and quality of a dog’s life. It’s an important issue. Particularly because guide dogs are bred and trained not to display signs of stress in their behaviour.”

Interpreting the Body Language of a Dog

Dr David Roberts is an assistant professor of computer science at the North Carolina State University and he helped to develop the prototype. “The harness was fitted with motion detectors to help interpret a dog’s body language, which is their primary means of communication,” said Dr Roberts. So far, the developers have a functioning prototype, so it could be a while before this type of technology is actually available to dog owners. But it’s an amazing step in bridging the communication gap between humans and dogs, and an incredibly exciting prospect for the future.

It’s hard to imagine our doggy boarders coming to stay at our dog boarding kennels in Chesterfield wearing this type of technology, but who knows what the future may bring? As far as we’re concerned, anything that helps us to better understand and look after dogs has got to be a good thing!