The Top 20 Most Popular Dog Breeds In Britain for 2019 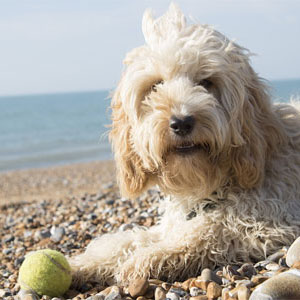 As Derbyshire’s premier dog kennels, we love all dogs, but we thought we’d take a look into what breeds are amongst the favourites in the UK this year.

Earlier this year ITV aired a programme called Britain’s Top Dogs Live. The show asked Britain’s dog lovers to vote live on their favourite dog breeds and featured fascinating facts about heritage, characteristics and personality traits of the top 100 dog breeds.  The top ten being decided in the final live vote at the end of the programme.

And so, without further ado, here are the nation’s favourite top 20 dog breeds for 2019. 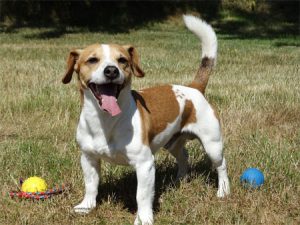 The Jack Russell Terrier is a small terrier that has its origins in fox hunting in England. It is principally white-bodied and smooth, rough or broken-coated and can be any colour.

Jack Russells are an energetic breed that rely on a high level of exercise and stimulation. They are relatively free from any serious health complaints. Originating from dogs bred and used by Reverend John Russell in the early 19th century, from whom the breed takes its name, the Jack Russell has similar origins to the modern Fox terrier. It has gone through several changes over the years, corresponding to different use and breed standards set by kennel clubs. 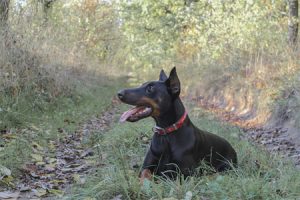 The Dobermann, is a medium-large breed of domestic dog that was originally developed around 1890 by Karl Friedrich Louis Dobermann, a tax collector from Germany.

Dobermanns are known to be intelligent, alert, and tenaciously loyal companions and guard dogs. Personality varies a great deal between each individual, but if taken care of and trained properly, they are generally considered to be loving and devoted companions. The Dobermann is driven, strong, and sometimes stubborn. Owning one requires commitment and care. With a consistent approach, they can be easy to train and will learn very quickly. 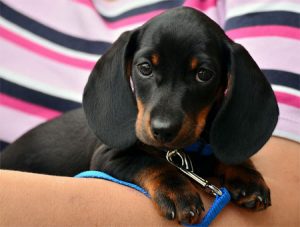 The dachshund also known as the sausage dog or wiener dog is a short-legged, long-bodied, hound-type dog breed. They may be smooth-haired, wire-haired, or long-haired.

The standard-size dachshund was developed to scent, chase, and flush out badgers and other burrow-dwelling animals, while the miniature dachshund was bred to hunt smaller prey such as rabbits. 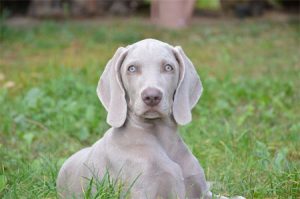 The Weimaraner is an all-purpose gun dog. The name comes from the Grand Duke of Saxe-Weimar-Eisenach, Karl August, whose court, located in the city of Weimar (now in the state of Thuringia in modern-day Germany), enjoyed hunting. 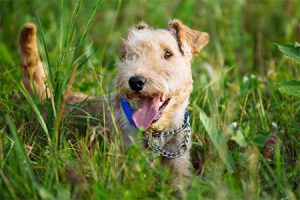 The Welsh Terrier originates from Wales and was originally bred for hunting fox, rodents and badger, but during the last century it has mainly been bred for showing. Despite this, it has retained its terrier strength of character. The Welsh Terrier has been claimed to be the oldest existing dog breed in the UK according to research.

The Welsh Terrier was a latecomer to the British show-ring (being primarily a working dog) and was not officially registered as a breed until the 19th century. It is currently on the UK Kennel Club’s list of breeds that are in danger of dying out, having as few as 300 or so pups registered annually, as compared to the nation’s most popular breeds that are registered in the tens of thousands each year. 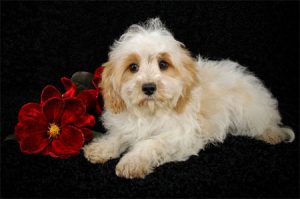 The Cavachon is a cross between a Cavalier King Charles Spaniel and a Bichon Frise. A cross between a barbet or water spaniel and a small white lap dog. They are a small breed of dog which is good with families and small children and get on well with other dogs. They can, however, be prone to some hereditary medical conditions due to their breeding heritage. They can be either be white, apricot and white, white with black markings or black with tan markings. 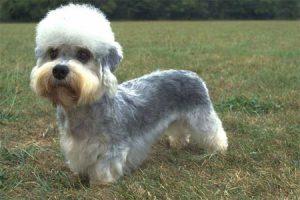 A Dandie Dinmont Terrier is a small Scottish dog breed in the terrier family. The breed has a very long body, short legs, and a distinctive topknot of hair on the head. They are friendly but tough, and are suitable for interaction with older children.

The breed is named after a fictional character in Sir Walter Scott’s novel, Guy Mannering. This character, Dandie Dinmont, is thought to be partly based on James Davidson, who is credited as the originator of the modern breed. Davidson’s dogs descended from earlier terrier-owning families, including the Allans of Holystone, Northumberland.
There are three breed clubs in the UK supporting the breed, although it is registered as a Vulnerable Native Breed by the Kennel Clubdue to its low number of puppy registrations per year. 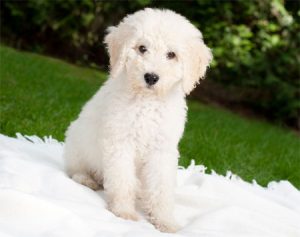 A Labradoodle is a crossbreed dog or Mutt/Mongrel created by crossing the Labrador retriever and the Standard, Medium, or Miniature poodle. The term first appeared in 1955, but was not initially popular. Not all Labradoodles are hypoallergenic, but it is a quality that many look for and appreciate in this type of crossbreed.

The Labradoodle became known in 1988, when Australian breeder Wally Conron crossed the Labrador Retriever and Standard Poodle for the Royal Guide Dog Association of Australia in Victoria.

Conron’s intent was to combine the low-shedding coat of the poodle with the gentleness and trainability of a Labrador retriever, and to provide a guide dog suitable for people with allergies to fur and dander. 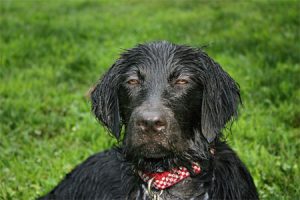 The Flat-Coated Retriever is a gundog breed. It was developed as a retriever both on land and in the water. The Flat-Coated Retriever is an active, multitalented bird dog with a strong desire to please people. Exuberant, confident, and outgoing, they make a loving family pet and can be companions to small children, provided adults are nearby to direct this dog’s boisterous enthusiasm. These retrievers require plenty of exercise and engagement to help channel their natural sporting energy. The British Kennel Club recommends that owners provide dogs with at least 2 hours of exercise a day. 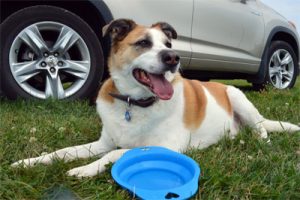 A mixed breed is one that doesn’t belong to any of the classifications or recognised breeds. The great thing about a mixed breed dog is that they all look different and have different characteristics. They also tend to live longer and be healthier as they don’t inherit their pure breed issues from two of the same breed parents. 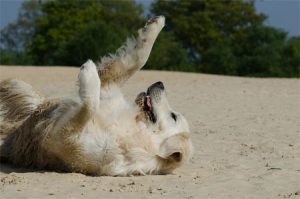 The Golden Retriever is a large-sized gun dog that retrieve shot waterfowl, such as ducks and upland game birds, during hunting and shooting parties. They were named ‘retriever’ because of their ability to retrieve shot game undamaged due to their soft mouth. Golden retrievers have an instinctive love of water, and are easy to train to basic or advanced obedience standards.

The Golden Retriever is popular as a disability assistance dog, such as being a guide dog for the blind and a hearing dog for the deaf. In addition, they are trained to be a hunting dog, a detection dog, and a search and rescue participant. The breed’s friendly, gentle temperament means it is unsuited to being a professional guard dog. 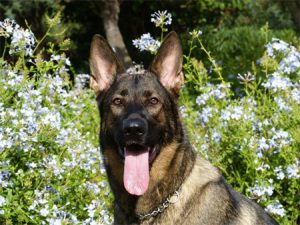 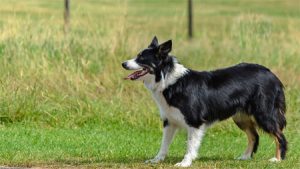 The Border Collie is a working and herding dog breed developed in the Scottish borders for herding livestock, especially sheep. It was specifically bred for intelligence and obedience.

Considered highly intelligent, extremely energetic, acrobatic and athletic, they frequently compete with great success in sheepdog trials and dog sports. They are often cited as the most intelligent of all domestic dogs.[2] Border Collies continue to be employed in their traditional work of herding livestock throughout the world. 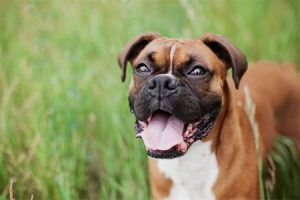 The Boxer is a medium-sized, short-haired breed of dog, developed in Germany. The coat is smooth and tight-fitting; colors are fawnbrindled or white, with or without white markings. The Boxer was bred from the Old English Bulldog and the now extinct Bullenbeisser which became extinct by crossbreeding rather than by a decadence of the breed.
Boxers are a bright, energetic and playful breed and tend to be very good with children. They are patient and spirited with children but also protective, making them a popular choice for families. 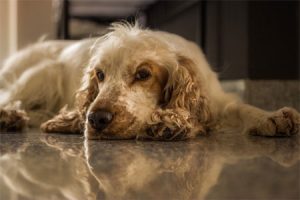 The English Cocker Spaniel is a breed of gun dog. It is noteworthy for producing one of the most varied numbers of pups in a litter among all dog breeds. The word cocker is commonly held to stem from their use to hunt woodcock. The breed can have litters of anywhere from 3-12 puppies. The English Cocker Spaniel is a sturdy, compact, well-balanced dog. It has a characteristic expression showing intelligence and alertness. 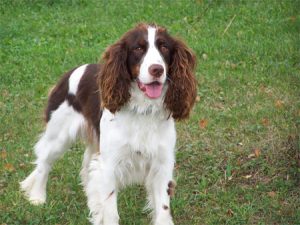 The English Springer Spaniel is a breed of gun dog in the Spaniel family traditionally used for flushing and retrieving game. It is an affectionate, excitable breed with a typical lifespan of twelve to fourteen years. They are very similar to the Welsh Springer Spaniel and are descended from the Norfolk or Shropshire Spaniels of the mid-19th century; the breed has diverged into separate show and working lines. It is closely related to the Welsh Springer Spaniel and very closely to the English Cocker Spaniel; less than a century ago, springers and cockers would come from the same litter. The smaller “cockers” hunted woodcock while the larger littermates were used to flush, or “spring”, game. 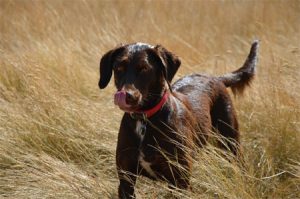 The Labrador Retriever, or just Labrador, is a large type of retriever-gun dog. A favourite disability assistance breed in many countries, Labradors are frequently trained to aid the blind, those who have autism, to act as a therapy dog, or to perform screening and detection work for law enforcement and other official agencies. Additionally, they are prized as sporting and hunting dogs.

The modern Labrador’s ancestors originated on the island of Newfoundland. The founding breed of the Labrador was the St. John’s water dog, a breed that emerged through ad-hoc breedings by early settlers of the island in the 16th century. The forebears of the St. John’s Dog are not known, but were likely a random-bred mix of English, Irish, and Portuguese working breeds.

Labradors have a reputation as a very even-tempered breed and an excellent family dog. This includes a good reputation with children of all ages and other animals. Some lines, particularly those that have continued to be bred specifically for their skills at working in the field (rather than for their appearance), are particularly fast and athletic. Their fun-loving boisterousness and lack of fear may require training and firm handling at times to ensure it does not get out of hand—an uncontrolled adult can be quite problematic. 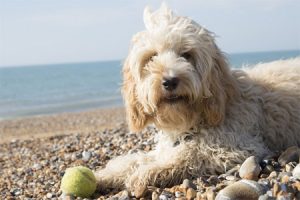 Cockapoos have become popular because they generally combine the outgoing, loving personality of the Cocker Spaniel with the low-shedding, low-dander qualities of the Poodle.[ Cockapoos are moderately active dogs; the level of activity needed varies depending on the type of Poodle cross. Cockapoos can be very agile, excelling at “retrieve” games and enjoying activities such as swimming. Cockapoos are frequently very needy dogs and as such are not suitable to be left alone for long periods as they frequently suffer from separation distress or anxiety. 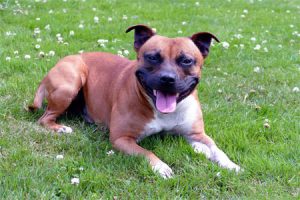 The Staffordshire Bull Terrier, also known as Staffie, is a breed of short-haired, small to medium sized dog that was developed in Staffordshire, England and northern parts of Birmingham. The breed first originated by crossing the Bulldog and Black and Tan Terrier, and evolved over time with the profusion of other breeds for refinement of purpose which, in mid-19th century Victorian England, was varmint control and dog fighting.

Well, there they are, Britain’s favourite dogs. But don’t worry if your dog isn’t on the list, to us, they’re all favourites!

Well, there they are, Britain’s favourite dogs. But don’t worry if your dog isn’t on the list, to us, they’re all favourites!